The last couple of weeks have seen nice steady rain, the valley has taken on its usual waterlogged squish squash which means the water is slowly being absorbed by the subsoil.

Our first order creek which joins up with others to become is flowing again and the filter ponds are slowing down the flow and the flow forms are doing their job of aerating and energizing the water before it leaves Nirvana Farm on its way to Clarendon Weir. (It is then pumped back to the Heathfield water tanks to supply this area… but that’s another story!)

Here are the flow forms in action in our creek. 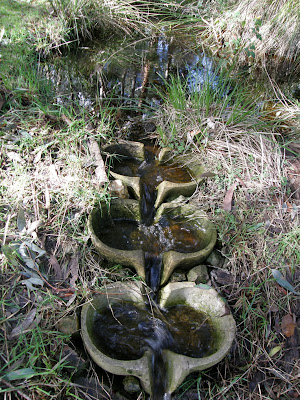 There is an abundance of wildlife around at present, maybe a sign of early spring! The kangaroos are enjoying the damp grass, while the bird’s colours seem to be brighter as they busily move around the bare trees. This cute ringtail possum has been around the garden for the past few weeks and managed to sneak into the kitchen when the door was left open. The passing of the Winter Solstice has seen the usual increase in egg production, the chooks all have lovely new feathers and look great. The geese also have responded to the increasing day length by pairing off and starting the mating squabbles. They will begin laying by the end of July or the beginning of August. Here is one of the roosters. 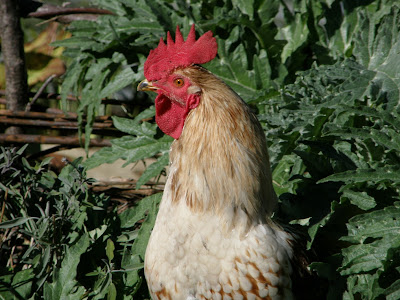 Posted by Deborah Cantrill at 16:40