One of those Days

One of the things we enjoy doing is playing social petanque. A few years ago Quentin started playing and encouraged me to come out at least to meet new people as he thought I ‘spent too much time working and needed to get out more.’ Although I really enjoy working from home,in my own quite space it is nice to meet different people. So each Wednesday morning we go off to play petanque with the Adelaide Hills Petanque Club down at reserve in Stirling. Quentin takes it more serious playing on Sundays as well as the occasional league games. 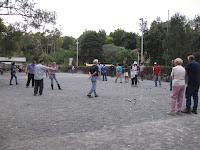 Wednesdays are very social with around 30-40 people playing. Each week there is a draw to make up teams of 3 or 2. We then play 3 games punctuated with morning tea, laughter, chat, much fun and sometimes a prize or 2...

It is from this atmosphere that the Derrick Rowley Trophy, in memory of Derrick is played. A competition that players go into a draw to determine teams. In the past it has been triples but this year because of numbers it was doubles. Quentin and I drew together (some thought was rigged but that’s the way a draw goes) I was actually looking forward to playing with someone I did not know and having a bit of a laugh but playing with Quentin I was bound to take it a little more seriously as it would be good to win a game or two especially since he had been feeling a little down with his hip and being restricted in what he could do.

In round one we drew to play our club president and Australian representive player, Brenton & his equally good partner John. We got off to a flyer and were well in front when we got stuck on 12. They clawed their way back but we finally won 12: 9 .That win would have done me for the day Next round another one of our Australian players & a league player from Adelaide club. We won 13:2 WOW. Next round against 2 league players 13:3 Forth game and we lost the toss, again 2 more league players they chose a heavy piste . This was a short game , all over in 3 ends 13:0 This was amazing I had never won so many games in one day!

Final round, crunch time we were up against A grade league player Jenny and Lorenzo , one of the better Wednesday players they had also won 4 games. This was the best game of the day highlighted with excellent pointing, with carro and counter carro and some good shooting. We where finally victorious at 13: 9.

WE WON the Day and the Trophy and some wine

Quentin can still take it serious and play league & I’ll stick to Wednesday social and a bit of fun.

Posted by Deborah Cantrill at 17:08