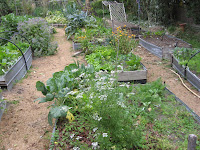 The challenge in the vegetable garden as the seasons change is to continue to get the last of the summer bounty harvests while at the same time continue planting to ensure harvest in the months to come. At present I’m still harvesting the last of the tomatoes, zucchinis, capsicums, basil, beans and about to harvest my cardoon. The pumpkins will be harvested in the next couple of weeks meanwhile carrots, chard, chicory, lettuce, endive, nasturtiums, augula, spring onions, kale, red cabbage, celery, parsnips, turnips, beetroot and self sown garlic as a salad green are all being enjoyed. 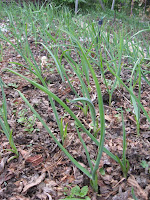 Veggies planted previously for future harvests include cabbage, cauliflowers, brussels sprouts, leeks, fennel, carrots, parsnips, Swedes, turnips, kohlrabi, spinach & an array of salad greens. The garlic, planted last month into warm soils, followed by gentle rain look wonderful already over 25 cm tall. The romanesco broccoli Kate gave me as seedlings in spring may be just getting around to setting a head or many smaller heads which will properly be more useful.

Most of the seedlings grown in containers in March have been planted out or given away. As usual I sowed my April seeds 2 days before the full moon on the 18th .The seeds I sowed include beetroot, carrots, spinach, spring onions, peas, broad beans, swedes, turnips, chicory, miners lettuce, mache, a mix of lettuce, Kate’s’ pale spinach.

The other essential April activity now that it has rained a bit is to apply the biodynamic preparations to the garden as well as the farm. Next week I will apply both horn manure (500) & barrel compost (also known as cow pat pit) the garden received both in March after the rains. Each preparation is stirred in the afternoon and applied on consecutive days .In general its recommended to use these preparations once in Autumn and Spring but I have found for the vegetable garden, which is asked to produce year round, that a couple of applications makes the garden sparkle and the produce grown there be strong , healthy, disease resistant and flavorsome. .

Take a photo wander around the April vegetable garden.

Posted by Deborah Cantrill at 19:11